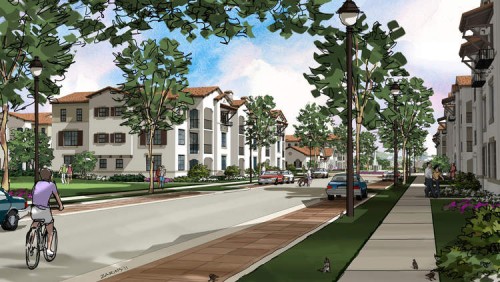 The city of Davie will vote on Wednsday to allow a new 350 unit luxury apartment community to be built where the once largest mobile home park called home to on Davie Rd Extension near the Nova Southeastern University College campuses.

The estimated $50 Million construction project located at 2990 Davie Rd is slated on the same land where the Palma Nova mobile home park once stood for many years until a few years back when it was closed down and residents for forced to move their mobile homes to other parks in Broward County Florida.

The new development called Toscana calls for 17 three-story buildings with one- two- and three-bedroom apartments. Rent price would average $1,500 a month, said developer Jim Carr, who is also building the Monterra residential community in Cooper City.

This project once approved will take about 18 months to complete and just in time for the upcoming semester for many of the young professional students who attend local colleges like Nova Southeastern University, FAU, BCC and some of the other schools in 2013.

The city of Davie purchased the 25 acre parcel of land in 2009 for $12.5 Million and used $9 million from reserves to purchase the land and town officals earmarked 7 acres for a park.